Writing the history of the people of the Fourth World

In the beginning, a man and a will

All over the world, extreme poverty is ignored and even sometimes denied. One man stood up to address this denial: Joseph Wresinski, the founder of ATD Fourth World. He was determined to challenge the community of thinkers, researchers, academics and leaders of the political and economic world on the question of extreme poverty – a community which, in his eyes, too often forgets the positive contribution of those who experience extreme poverty daily and those who commit themselves by their side. He invited them to bring justice and humanity back at the heart of our societies and rethink the policies designed to fight against poverty, involving all the people concerned, acknowledging them as experts and not just as mere witnesses.

From the very beginning, Joseph Wresinski insisted on everything being written down and documented so as to keep track of the commitment and combat of the activists, friends, volunteers and allies who are committed to eradicate poverty.

Today, this ambition is carried out by the Joseph Wresinski Archives and Research Centre (JWC), situated in Baillet-en-France. From the outset, through writings, photos, sound recordings, films and works of art, the people involved in ATD Fourth World have built up a heritage destined to be gradually enriched over time. These archives are the source of a history of the actions to overcome extreme poverty and of the struggles to eradicate it.

“The JWC”, says an ATD Fourth World volunteer, “is one of the only places keeping a record of the fight of the poorest against poverty. It stands for our ambition to have the people of the Fourth World taken into account in our neighbourhoods, our cities and our countries”.

«Many people don’t like us and wish we had never existed; but here at the Centre, now that I have visited it, I know that we can no longer be ignored».

(Mariangeles, an activist from Spain).

The Joseph Wresinski Archives and Researches Center code of ethics

The JWC – a university of action against poverty

Over the years the JWC received hundreds of requests and visits from people living in extreme poverty, students, actors in the field and academics. These requests are testament to the various objectives being achieved:

Rooted in this history, the research unit of the JWC carried out and supported major awareness projects in 2018. The proceedings of the international seminar  on ‘Rethinking our world from the perspective of poverty, with Joseph Wresinski’ were published by the French publishing house Éditions Hermann, bringing together contributions from historians, philosophers, sociologists, people living in extreme poverty and other actors in the field within a single publication, as has rarely been done before. This publication has prompted numerous invitations to speak at symposiums, as well as new academic works.

Various historical works describe the sea change prompted by the emergence of a new political actor, the Fourth World, which until then had been considered as a population in need of help, at best. Axelle Brodiez-Dolino, a historian at the Centre National de la Recherche Scientifique (CNRS) [National Centre for Scientific Research], has elected to tell the story of ATD Fourth World and its political influence, a story of going against the grain, thanks to its capacity to combine the knowledge of people living in extreme poverty and other actors in society.

The Merging of Knowledge® methodology used with people living in poverty, and refined over a period of twenty years, was chosen to facilitate universal, participatory research on the hidden dimensions of poverty.

The ethical, methodological and epistemological questions of merging knowledge with people living in poverty continue to be explored in more depth so as to create benchmarks that may inspire participatory research on poverty.  A “permanent, collaborative space for developing participatory research through merging knowledge with people living in poverty” is also currently being developed thanks to an agreement signed between ATD Fourth World, CNRS and the Conservatoire National des Arts et Métiers (CNAM) [National Conservatory of Arts and Crafts]. As the authorities for science and action in France, these two institutions recognise the urgent need to facilitate conditions for constructing knowledge that is both credible and valuable to everyone, for the future of science and that of democracy. 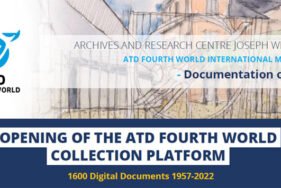 The Knowledge of People in Poverty

“Keep going, despite the challenges”

Maintain our ties and continue our missions Against the backdrop of a long and major crisis linked to the pandemic, (…) END_OF_DOCUMENT_TOKEN_TO_BE_REPLACED 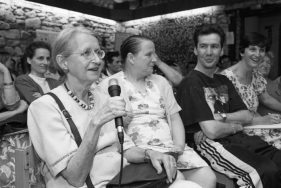 On October 25th, 2020 Geneviève de Gaulle Anthonioz would have been 100 years old. During this year’s International Archives Week, (…) END_OF_DOCUMENT_TOKEN_TO_BE_REPLACED