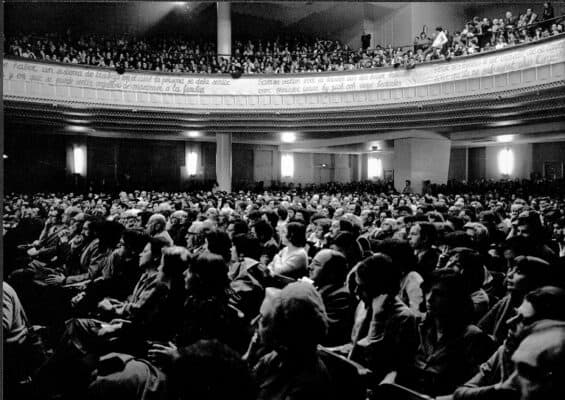 17th November 1977, Festival of Solidarity with The Fourth World, Paris.

The ATD Fourth World Movement was founded on a triple refusal, the very things to which the sub-proletariat in their silent revolt first objected, namely:

There can be no excuse for a society which tolerates poverty since:

Poverty can be avoided; it is not a curse on humanity about which nothing can be done -“Poverty is of man’s doing, only man can destroy it!”- Poverty is not a left-over of a prior, less developed society that will disappear by itself through economic growth. This poverty will persist, despite all progress and changes of government, unless its elimination is given priority in social planning at a national level. It is not the price we pay for changes that would leave an increasing number of social misfits in its wake. The Outcasts of today were already outcasts yesterday! It is not a question of change.

The Movement rejects all excuses for the persistence of poverty, which exists only because we allow it. The Movement calls for the determination at a political level to eliminate it.

The Movement does not accept that deprived families should be accused of enjoying living in extreme poverty, of remaining in it out of indifference or lack of will ! Indeed, who can take pleasure in being destitute and dependent on other people? Who really wants to do the most thankless jobs? Who can put up with being unappreciated as a worker? Who likes being unable to take part in the workers’ struggle, or in the political action of one’s choice, or being considered incapable and lazy? Who enjoys being despised, having no way out, not being listened to, or living apart from one’s fellow citizens? If you remain in such poverty, it is because you do not have the means to get out of it; it is because you have not received the education that would have enabled you to learn a trade, or to build friendships and mutual support; you have not been taught how to express yourself or to understand the ways of the world around you, a world which belongs to you.

How can you happily accept being deprived of art, music and poetry; or having no power over your own life or your family’s; not seeing your own children grow up, or seeing them handicapped because they dropped out of school? Who likes being rejected out of fear or lack of trust? Who can believe that life is worth living when even hope is a source of fear?

This attitude towards the sub-proletariat gives rise to an intolerable waste of spiritual and human potentials, something the Movement cannot accept.

These people know better than anyone what oppresses and destroys man. If we listened to the families living on sub-proletarian housing estates, they would bear testimony to everything in our society that crushes man; they would vouch that all change, all progress, and all new political trends should benefit all of us. Their experience could teach us what justice and freedom really are! They could teach us the necessary demands prescribed by a true democracy, where every citizen is heard because s/he is a human being!