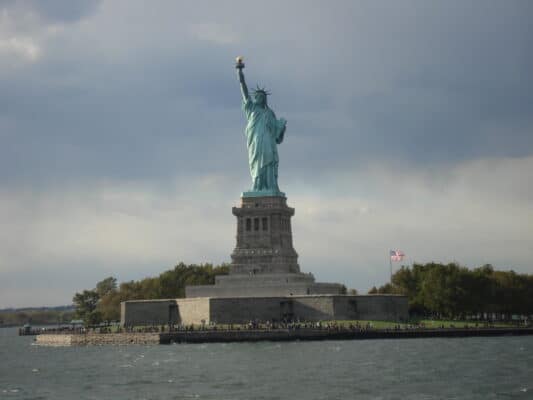 As the American election approaches, we can look back on how Joseph Wresinski saw American’s destiny.

“As a people, you descend from those families who, throughout the centuries, stood up against misery and oppression. In coming to this land, your ancestors wanted to build a society of justice, brotherhood, and peace. Their pride and courage flow in your veins. This is why America is a symbol of freedom, justice, and peace, recognized as such everywhere. You owe the world freedom, justice and peace.

Freedom, justice, and peace have often betrayed in the world. Even America has not always been faithful to its ideals and destiny. But when America is unfaithful, the whole world is betrayed and suffers, and the poor and humiliated and deprived of hope because they are left without a homeland of freedom.

They are left without a country, without a land where freedom can take root and grow, and where hope can spring again. America cannot ignore this, cannot be allowed to forget it. Those who suffer misery, hunger, ignorance, and despair, keep their eyes focused on this country. America has the responsibility to allow the poorest to encounter freedom, justice and peace.

This encounter of misery with freedom, justice and peace compels America to change its way of life, its thoughts, its attitudes, and also, we must admit, its complacency. This country does not necessary have the mission of being the first in everything, of being the richest in the world. Its mission is to serve and defend the poor throughout the world, and first of all its own poor, who are struck down by unemployment, illiteracy, homelessness, and are condemned to soup lines, welfare, and contempt.

But to eliminate misery is not just a question of distributing dollars, nor planning development programs in offices – programs which always benefit the strongest: neither is it a matter of waving banners or shouting slogans. To eliminate poverty requires an encounter with men and women. It requires going to seek them out wherever they are – not in order to teach them, but to learn from them how valid our convictions really are, to learn from them who they are and what they expect from us, so that, together, we can work toward what they really want.

So, have the courage to leave your security behind you as your ancestors did before you. Go to the poorest in the world. Then, and only then, the poorest will have reason to believe in freedom, justice, and peace.”