Skip to content
Home > Writings > Children of Our Time

Children of Our Time 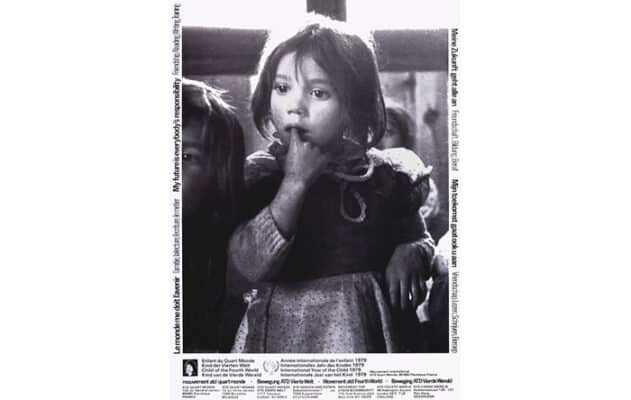 Author: Joseph Wresinski
Description/references: Preface for the White Paper on Children of Our Time published in 1979, International Year of the Child.

On the occasion of World Children’s Day, November 20, it is interesting to highlight the preface by Father Joseph Wresinski for the White Paper on Children of Our Time published in 1979, International Year of the Child.

Children Of The Fourth World – An opportunity for every child

The children who speak to us from the pages of this document are strangers to us. The world around them finds it hard to recognize them for who they really are.

Yet these children were born into Western societies. Why then is it so difficult to acknowledge their existence? The consequences of this are dire, forcing millions of children to live without adequate education or health care, their families deprived of financial security, decent housing, a decent environment and entirely disenfranchised.

Many people regard them simply as victims of misfortune or disability, ill-served by circumstance. However, both they and their parents are victims of a form of blind faith. They represent the hidden face of the society we ourselves have created. They are the forgotten children of a society whose present lifestyle and development only benefit those whose citizenship it recognizes. These same people have never broadened their horizons, their thinking, their institutions or their efforts to include the need to embrace these children.

The children of the Fourth World belong to a sector of the population excluded from industrialized society since the last century. Deprived of the means to participate in the means of production and the evolution of the rural and urban working classes, their forebears were unable to create a better future for them. At the bottom of the social scale, an entire section of the population couldn’t even haul themselves onto the bottom rung of the ladder. Since then, successive generations of parents and children have continued their lonely journey of social exclusion. Which of us cannot fail to be profoundly ashamed when they find out about this? How could we have made such bad use of our own achievements in failing to use them to identify and condemn this exclusion?

These questions are all the more unacceptable, given that we have made genuine efforts to protect human rights and the rights of the child. For the most part we believed that we were on the way to success in our industrialized societies. We believed that things were continually improving thanks to our far-reaching and deep-rooted social and economic development. Of course, no one can deny that we can ever do enough or that every society has its imperfections. But imperfections do not necessarily cast doubt on our basic principles or the thinking that inspired them.

The children of the Fourth World for their part challenge the basic thinking that underpins our way of life. It was at their expense that the whole fabric of society was built. Living in the bosom of their often large impoverished families, they don’t just cast doubt on our political convictions and actions; more fundamentally, they force us to look at our understanding of childhood. The twenty years that have elapsed since the Declaration of the Rights of the Child have not proved sufficient to prevent their denial to four million children in the European Economic Community alone. This is because we don’t have a sufficiently well-developed concept of childhood by virtue of which we are able or willing to protect and uphold these rights.

It is essential that we talk of the rights of children as incontrovertible, but isn’t it even more important that we explain the reasoning behind them? Are we even capable of doing this in the developed counties? Do we have a clear and unequivocal understanding of childhood that we are willing to defend? Do we truly know what it is? Do we truly respect our children for what they represent for humanity today and even more so for the future?

It’s not obvious that we do. We might even be tempted to say that the more we speak of the rights of the child, the less clear it is that they are really part of our thinking in their own right. The Preface to the 1959 Declaration, magnificent as it is, fails to make clear the profound principles that lie behind it. We can well understand why, given that every country had to be able to sign it. This cannot justify the fact that the Western nations have nothing to say on the subject. It’s an awkward and pressing question. Isn’t it true that the reality experienced by Fourth World children, dreadful as it is in itself, forces us to understand what we inflict to a greater or lesser extent on all of our children?

At times, our attitude might at worst lead us to think that it would have been better if the children of the Fourth World had never been born. Fourth World mothers are hard put to defend themselves against their well-intentioned critics who advise against pregnancy and pressure them to have abortions. The lack of suitable housing, over-crowding, the absence of fathers or unemployment are amongst the many arguments used to justify not having babies or putting them into foster care or up for adoption. It is this kind of behaviour which robs children of their childhood and provides the absolute proof of a more general confusion in people’s minds?

Doesn’t a child have the right to well-being simply by virtue of their existence or do they only have rights to the degree that we decide to put all of our efforts into assuring their well-being?

Could it be that the disproportionate importance we have attached to the material and physical well-being of children as an end in itself has become an excuse for no longer making clear our understanding of childhood in terms of unconditional love? Has our notion of the child as a recipient of goods and rights come at the expense of seeing them as opportunities for the exploration of conciliation and hope? Have our children, whose love has always been our last line of defence against disaster, now become a burden that prevents us all from living as we choose?

We know that Fourth Word children hardly count in our schools, but how much do all the other children really count? We are keen to introduce our political ideas and arguments into the classroom – why not? We make children take an active part in our strikes on the basis that it is for their own good. Did we ever begin to clear the air about our own frustrations and pre-conceived ideas in order to take a close look at how they live and really listen to them? Is it really in their nature to be the objects of discord and dispute? Aren’t their games and childhood dreams better employed elsewhere in bringing harmony and reconciliation? Don’t they have something new to teach us? What have we ever done to make sure that we don’t use them as a pretext or channel for the fulfilment of our own ambitions or visible signs of our own success?

A Fourth Word child grows up in our slums in the shadow of abattoirs or derelict factories or in our inner cities, on estates trapped between motorways and cemeteries, abandoned to their fate by the town planners. Neither they nor their parents can possibly imagine what is understood by a stimulating and life-enhancing environment. Do we ever consider what it’s like to grow up in concrete jungles, lacking facilities and green spaces, in blocks of flats where children’s play and laughter is seen as a nuisance to be avoided at any price? How can children remain children for long, living in such close proximity to things that introduce them far too early to adult preoccupations?

Fourth World children, without protection from the harsh realities of extreme poverty, never know a true childhood. Aren’t they entitled to it like children from other backgrounds?

Fourth World children are all too frequently placed in foster care and deprived of the love of their kith and kin. What’s the good of talking about the right to be loved when we put family life in such peril, even amongst those who are economically better off? What has become of the family home as the rightful place for learning about giving and receiving love with no strings attached and learning about concern for others that makes for true equality? What have we done to protect this precious time for development when children’s hearts and minds are at their most receptive and they long to be loved? Do we really still believe that parents should make the most of every possible opportunity to share the basic human values with their children?

It is easy to see how rights regarded as absolute can become conditional and relative as soon as they are formulated. Children’s basic needs all too often remain unaddressed. It is not enough to say that this is the result of inequalities resulting from where you are born. This may be true, but extreme poverty and the near total exclusion of children of the Fourth World show us that the causes of childhood inequality lie much deeper. As we have already said, they do not merely reside in our politics and structures but in our deepest convictions, collectively and individually, about the meaning of childhood.

These children at the bottom of the social ladder render us a great service when they remind us of this. The cost is incalculable if we continue our refusal to recognize this. This is true for the children of the West and for all the world’s children.

The hallmark of the undeniable socio-economic achievements in the West is the capacity it has given the industrialized nations to impose them on the other continents, enabling economic growth to take place, but also bringing the short-comings that go with it. Up to now, perhaps, the West stands out in making permanent the exclusion of the poorest children. It stands out in its uncertainty and confusion about the conception of childhood. It stands out in trying to eradicate poverty by removing all material risks at the expense of completely overlooking the need to give proper recognition to being a child. What does it say about developing countries when a Fourth World of the poorest is allowed to develop alongside their economic development whose models and methods are imported from our own countries?

The voices of countless children speak to us from the pages of this White Paper. They challenge us from the margins of our societies and rightly threaten to disturb our peace of mind.

They were bound to be raised one day because what matters for the future of humanity always ends up by making its voice heard. If we attempt to stifle these voices, sooner or later, the alarm will sound. We must listen to these voices and seize the opportunity that they offer us for all of the world’s children.