Skip to content
Home > Writings > From working to having a trade

From working to having a trade 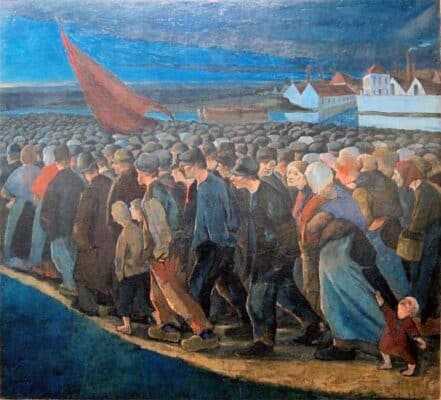 Making the poor work at any job, whatever it may be, so long as they are useful, has always been the aim of societies where people come after interests and efficiency.

This idea of man working regardless of the cost has justified all slavery, alienation and the exploitation of man by man throughout the ages

It is because of this idea that bread depends on labour and that the sweat and toil of workers have been used to build societies in which humanity is not the primary consideration.

It is this conception of the working man, provided with a job, that has gradually destroyed the moral and spiritual structure of our modern societies. (…)

“Freedom through work” was the ideal put forward by liberal societies. Totalitarian regimes responded with: “Salvation through work”. Thus, recognition and respect for human beings and their dignity had little impact on development of modern societies.

To work, yes, to be useful, yes, but to contribute to progress, no. Because for that, it would have been necessary to have a recognised trade, i.e.to be a worker with an identity conferred by a acquired trade, a freedom assured by a recognised profession and set of skills; to be listened to, not because you work, but because your work gives you value.

It would have been necessary to be someone who was not replaceable, a stopgap, used at the mercy of fate and the economic situation; but someone who, thanks to his trade, could be recognised by his own children, be accepted in his own environment, someone who could fight in the unions, on an equal footing with the other workers and be defended by them.

What sets individuals free is not work, but the dignity it confers. If the sub-proletarian world is rejected, it is because it is the part of the working class without a trade, without a profession. This must commit us to fight for every man to have a trade, for every young person to acquire an education for his lifetime.

There is no other way to destroy the sub-proletarian condition.