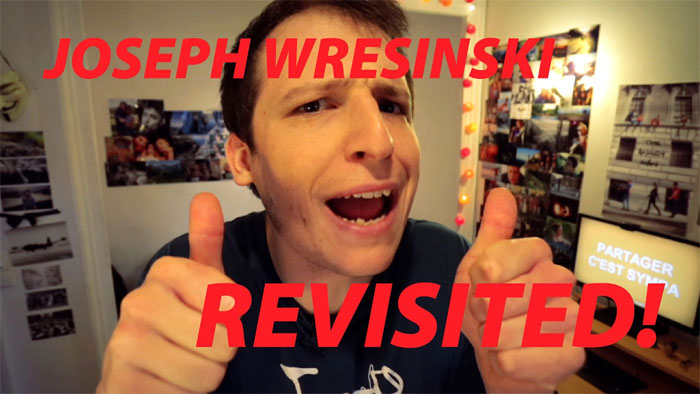 Discover the life of  Joseph Wresinski, founder of ATD Fourth World through this funny video by Vincent Verzat!

Just this once I am going to tell you about a guy who marked my childhood, a great figure of French history, such a great figure that his words are carved in stone on the Trocadero in Paris, so they would be remembered.
But WHO remembers ? I’m ready to take names.

This is a guy of the stature of a Gandhi or a Dr. King, but made in France.
The guy I’m talking about was called Joseph Wresinski.

Me: Joseph was born in 1917 in Angers of a Spanish mother and a Polish father.

Detractor: Sure. And why not “and I’m really cute”?

Me: Well, “and I’m really poor” would be more accurate.
Anyway, at the time, there weren’t any jobs going in international finance, so he became an altar boy, a job that paid 2 francs a week. That’s not much, but it his family from starving.
From altar boy he graduated to priest, and one fine day, he was sent by his bishop to Noisy-le-Grand, on the outskirts of Paris, in an emergency-housing settlement. Well, settlement is putting it nicely : it looked more like a WWII prison camp, or a shanty town made from halved containers set in mud, and overrun with rats.

Detractor: That’s disgusting, why are you telling us about all this ?

Me: Well exactly. This guy’s story is about a movement which arose from the mud to fight destitution in France and beyond. By destitution, I mean the kind of poverty that haunts families from one generation to the next, crushing their self-esteem. Fighting destitution means giving pride back to these men and women, so they can stand up for their rights. Which as you can imagine, was quite a task.
Little Joseph was already 40 when he moved to the camp in Noisy-le-Grand, and as he discovered these people’s living conditions, his whole childhood flashed before his eyes and he realized: “these are my people, and we will not let this happen !”
He started by kicking out all the charities who ran the soup kitchens and food pantries.

Detractor: What an idiot!

Me: Yeah, you can imagine the population of the camp wasn’t super-happy about this, but Joe had some strong arguments :
[scene with 2 characters]
– Wait a minute, how are we going to survive without the soup kitchens?
– Well, how did you survive before they came along ?
– We managed.
– There you go then, we’ll manage.

Joseph was convinced that the soup kitchens, although useful in an emergency, kept the camp’s residents dependent . Destitution cannot be alleviated, it must be destroyed. He was against the kind of aid that helps you survive but doesn’t give you the means to live. And he knew what he was talking about : Hand-me downs that are too big, too small, too ugly, it helps in a pinch, but you can’t live like that. Sure, it’s better than going naked, but it doesn’t really help in a job interview!
Joe didn’t just kick out 28 charities from the camp, he replaced them with schooling for the children, apprenticeships for the youth… basically, with the tools to help people liberate themselves.

And right in the middle of the camp, he set up a beauty parlour.

[cutscene] Hello girls, Enjoy Joseph here with a new beauty tutorial. So, today, we’re going to learn to take care of our HAIR [zoom on bald head], let’s get to it !

Me: OK, so I exaggerate, but his idea was to help the women of the camp reclaim their pride. Thanks to manicures and make-up, the ladies polished their self-esteem and styled their courage.

Me: Yes, and it worked, everybody in the camp got together to erect collective buildings, a kindergarten, a library… And more and more people came to help out, like Geneviève De Gaulle-Anthonioz, niece of the General, with whom he went to see the local prefect, then the members of parliament, the president of the Republic.
And every time someone volunteered, he suggested that they come and live in the camp.

Detractor: What, the rat camp? Why?

Me: So as to do things together. He said that if we let the poor take their destinies in their own hands, without replacing them, without doing things for them but with them, then the game would be half won.
And it worked : in 1957 the families of the camp in Noisy took their destinies in hand and started a movement to fight against destitution, which they called “Aid To Distress Fourth World.”

Detractor: Whaaat the hell on earth is that supposed to be?

Me: The Fourth World is that part of the population silenced by destitution, who has never appeared in history books, the people whom social progress has left behind. And rather than endure the situation with their heads bowed, the idea of the Fourth World is for those people to unite and stand up for their rights! Nothing like feeling part of a movement to hold one’s head up high!
But obviously, finding a cool name like Fourth World wasn’t enough to move things forward. The destitute families couldn’t defend themselves because…

Detractor: Because they were broke, got it!

Detractor: because they were unarmed then ! Revolution!
Me: Wrong again! It was because they didn’t have the words! So Joseph set up People’s Universities to help them overcome the fear of misspeaking, practise public speaking, and to assert themselves. Now that I think of it, democracy depends on every voice being heard, right? So the poor must be able to speak up!

And it works. Joseph travels all over the world and unites the people of the Fourth World, to the point where on October 17th 1987, 100,000 of them march in Paris to proclaim that “WHEREVER MEN AND WOMEN ARE CONDEMNED TO LIVE IN EXTREME POVERTY, HUMAN RIGHTS ARE VIOLATED. TO COME TOGETHER TO ENSURE THAT THESE RIGHTS BE RESPECTED IS OUR SOLEMN DUTY.”

Joseph Wresinski died the following year, but the wave he started continued to sweep the world. And I am recording this video today because 2017 marks the sixtieth anniversary of this movement, an event of national importance according to the ministry of culture, but that none of my mates know about! Yet we should all desire the eradication of poverty, its existence helps nobody. We must conceive of a society without poverty, alongside those who live it.
So let’s act All Together in Dignity, what do you say?