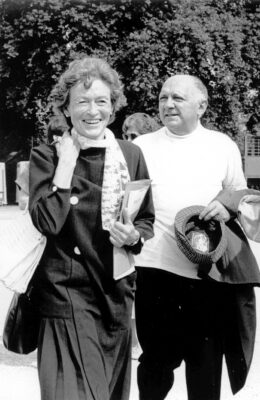 On 22 June 2021, Alwine de Vos van Steenwijk would have been 100 years old. This anniversary gives us the opportunity to remember this Dutch diplomat, who was posted to Paris at the end of the 1950s as the permanent representative for the Netherlands to the OECD.  Having become aware of the existence of the camp for the homeless at Noisy-le-Grand, just outside Paris, she went to see it for herself. Her meeting with Father Joseph Wresinski changed her life. Some time later, she gave up her diplomatic career to help (or come to the aid of) Father Joseph who was struggling with a handful of families who were rejected by all people with no understanding about poverty. At the request of Father Joseph, she became involved in research to make the people living in poverty known and recognised in France, Europe, and throughout the world. As President of the International Movement ATD Fourth World from 1974 to 2002, she made it possible for Father Joseph to be heard and to bring the voice of the Fourth World to the attention of the highest international bodies.

After the death of of the founder of the Movement and while continuing her mission with international institutions, she founded the Maison Joseph Wresinski, the forerunner of the present Joseph Wresinski Centre, to preserve his legacy and allow the greatest number of people to have access to it. She died in January 2012 in the Netherlands.

This is how Father Joseph Wresinski recalls his first meeting with her in his book The Poor are the Church1..

“To bear witness, we had first to show what the families lived, what was imposed upon them, what they suffered and what they refused to accept.  The determination to proclaim their hopes and capabilities came later.  I was anxious, in the first place, to convince the authorities and public opinion of the injustice that the sociological and historical reality of their lives represented.  However, I had not attended college and I was more inclined to act than to study.  I tried hard to improve my reasoning and build up my intelligence, but we needed more than that.  We needed a scientific guarantee.  When Alwine de Vos van Steenwijk arrived, on a wintry first of January, I asked her to sort out clothes; but then, when she asked me, “What shall I do now?”  I told her to go and study.  She was taken aback, as André Etesse had been when I asked him to take charge of a dead man and then to preside over an association, when he had come only to deliver a package of clothes.  Alwine remained pensive for a while, especially because, as she was a diplomat, I had asked her to go and study what was happening in other countries.  The following day, because she was Dutch herself, I asked for her help in receiving a Dutch journalist.  Then she understood that, in order to explain things to other people and to persuade them, she had to be knowledgeable herself.  This was how the Research Institute started, the first one to be started by a French association fighting extreme poverty.

The Institute was gradually built up, not without hardships and tears, and amid general misunderstanding.  Alwine had a letterhead printed as “Social Research Bureau.” She then started to do what her profession had taught her; that is, set up public relations, become known at UNESCO, and organize a study tour of the Netherlands, followed by an international symposium.  We had to provide accommodation for the experts she invited to the camp at Noisy.  Sessions of the working groups were held in a shack where we had to sit on piles of mattresses.

You were right to remind us that studying poverty was not respected in France in 1960.  The mention of the word “poverty” itself was not well received.  At the Paris family allowances office, where they used the term “social maladjustment,” the comment on our first volunteers was: “Probably yet another lot of ladies knitting for the poor.”  Others said that studying poverty was a way of exploiting the families.  Such slander and antagonism contributed greatly to binding together the volunteers who were still so few at the time”. 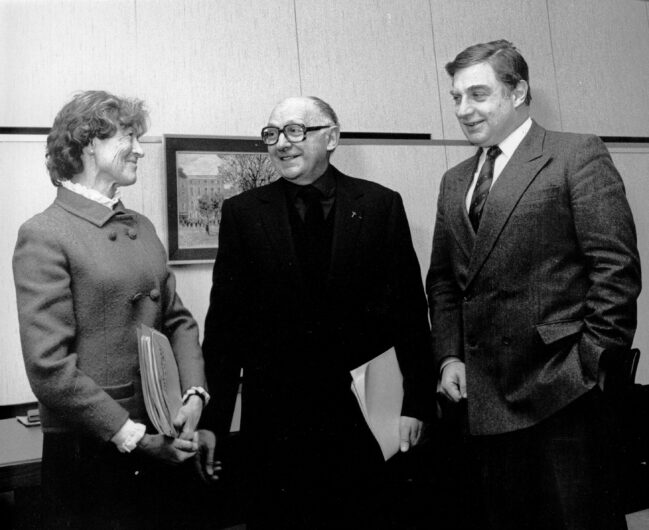 Alwine de Vos van Steenwijk wrote many books and published numerous articles. Her first book, The Sub-proletarian Provocation¨, published in 1972, had a considerable impact. It ended with two pages entitled “In conclusion”, which we translate here2..

“There is of course a simpler reason for accepting the most deprived citizens as brothers and teachers. It is too simple for some, because there is nothing revolutionary about it and it does not involve any spectacular project at the outset. Yet it seems to us to be the truest, the most immediate, the most humane of reasons. The most reliable campaigners we have met in the fight for a new egalitarian society are those who went to the grey areas, simply because they recognised unspeakable suffering there and found it unacceptable. They went there on the spur of the moment, often with no clear strategy and not knowing whether they would make a difference, simply because they found a people so wretched who at least would no longer be alone in their misfortune. They had too much respect for them to drop into their lives out of the blue: their first wish was to understand and become their allies. Little by little the alliance gave rise to understanding, then to short and medium-term projects, and finally to the blueprint for civilisation. As people of their time, they also had the desire to organise themselves, to improve, to learn new trades, to develop a set of principles, to work out how to measure their effects, to use computers for this purpose, in short, to be effective.

All this came about as a matter of course, but also because from the beginning, there was a genuine desire to walk alongside people and really listen to them.

The poor are, it seems to me, good teachers. We owe them everything we have tried to set down in this book. If this record leaves so much to be desired, it is because, on this point, our teachers could not help us. They will say it infinitely better for themselves, when we have finally given them the means required and equal opportunities to enter University”.