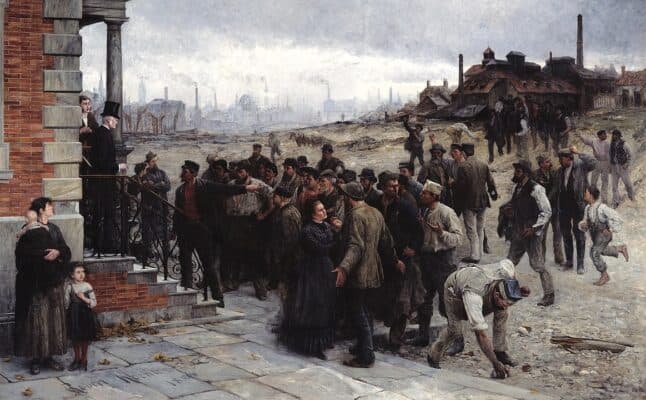 This message, intended for the General Conference on Unemployment and Work (Etats généraux du Chômage et de l’Emploi), organised by the National Movement for the Unemployed and those with a lack of job security (Mouvement National des Chômeurs et des Précaires) in Paris on 5 and 6 March 1988, was recorded by Father Joseph Wresinski before his operation in February of that year. After his death on 14 February, the organisers of the General Conference decided to broadcast this message at their opening session.

As a result of the Covid-19 pandemic, many people have been forced into unemployment. This text invites us to rethink human activity in such a way as to allow every human being to have access to work and the dignity it confers, and at the same time to the culture that allows them to fully participate in the life of the nation.

I – THE RIGHT TO WORK AND HUMAN RIGHTS

The importance of the General Conference on Unemployment and Work (In French, Etats généraux du Chômage et de l’Emploi)1  and the issues that will be discussed there is clear. They are a matter of concern for those who are currently unemployed and for those threatened with unemployment. Far beyond this, they are of concern for the whole of today’s society challenged to rethink the right of everyone to work and to participate in the context of the recognition of their human rights. This conference will only have any real value insofar as it is able to examine what is true about the right to work in the context of the indivisibility of liberty, Human and Civil Rights.

Where do we stand in this respect?

II – THE INADEQUACY OF THE “SOCIAL TREATMENT OF UNEMPLOYMENT”2.

In a society where making a living through work has increasingly become the principle and virtually the only means of expressing one’s dignity as a person and as a citizen, we have for several decades completely failed to ensure that the right to work is absolutely guaranteed down to the very bottom of the social ladder. Worse still, at the bottom of the ladder, the support systems that allow the unemployed to maintain their status as workers and protection for their families have been made equally inaccessible. This lack of guarantees, which existed before the economic downturn and major economic upheavals, has meant that with the rise in long-term unemployment, particularly among the least qualified and often least literate men and women the level of exclusion from the recognition and rights accorded to workers has also increased.

What is true today is that the number of those affected is increasing and our failure to maintain the Human Rights identified in the Constitution has become more obvious. This is increasingly shocking to public opinion which has ignored them for so many decades. As a result, there can now no longer be any question of a “Social Treatment of Unemployment”. Any ad hoc, temporary solution by means of “work schemes” or technical training that does not give access to the labour market or participation in it, will not help in restoring rights.

It will always be true that the creation of jobs and the provision of large-scale vocational training opportunities remains an absolute duty of the state. This duty cannot continue to depend solely on the goodwill or ideology of whichever party is in power. We need a national consensus to ensure that unemployment ceases to be the subject of shifting political rivalries.

We need a new national consensus which takes seriously the times when workers are unemployed. Civil servants, employees, teachers, and self-employed workers all talk increasingly about the need in modern professional life to have regular sabbaticals, free retraining, and voluntary leave of absence… They rightly claim and are given this time which is not intended for increasing their skills in their chosen field, but rather for significantly broadening their general cultural development.

People who are caught up in the mainstream of greater participation in future economic life understand only too well the basic requirement for sound cultural enrichment. Unfortunately, this avenue, which is even more necessary for the long-term unemployed, who are often deprived of their own cultural heritage or least able to interact with the prevailing culture, is totally lacking.

Culture, in the widest sense of the word, has generally speaking always been denied to the working classes. They have always had to fight their way out of poverty by the work of their own hands and organizing themselves. Workers living in extreme poverty do not even have this possibility. Access to culture is a necessity and an absolute right for them.

A second unavoidable duty of the state is to entrench human rights and freedoms by taking the necessary measures to ensure that unemployment, when it cannot be avoided, is converted into sabbaticals. A time when those involved can really recharge their batteries, acquire training, master new techniques, but above all, through this acquire access to the wider culture which they have always been denied in order to obtain equal recognition in economic life and in every other aspect of life.

It is essential that we fight for every person to have a meaningful job and the dignity of being regarded as a worker of equal standing. To truly succeed in this struggle, however, we must at the same time fight unstintingly for the inevitable periods of temporary unemployment to be used as a sabbatical time for cultural and personal advancement, a time dedicated to the widest possible training in life skills including membership of trade unions, spiritual development, and artistic creation.

The International Movement ATD Fourth World also demands the following from the General Conference on Unemployment and Work:

– to insist upon the right to culture for all the long-term unemployed, for all unemployed people, and for all workers with a low-level of training or who are threatened with being laid off.

– to insist that definitive measures be taken so that the dual right to work and to culture become irreversibly enshrined in the duties of the State.