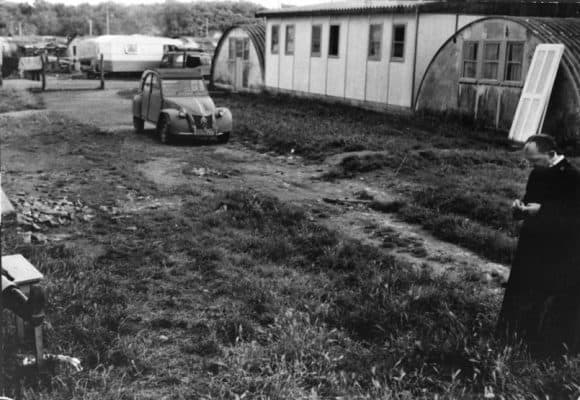 I arrived on the plateau called “Le Château de France” on the fourteenth of July, 1956.  The sun was scorching and the alleys were deserted.  There was no one outside.  In front of this emptiness, I said to myself, “In the old days, sources of water, road junctions, churches or businesses brought people together.  Here, utter poverty is what brings people together.”  This was like an inspiration.  I knew I was not facing a usual situation of relative poverty (as one would say then) or personal problems.  I had to deal with collective extreme poverty.  I felt at once that I was in front of my people.  I cannot explain it.  This is how it was.

From that moment, my own life took a turn.  Because, on that day, I vowed that if I stayed, I would see to it that one day these families could go up to the Vatican, the Elysée Palace, and the UN.  That blinding poverty spread before my eyes in stifling heat and absolute silence had me caught in a trap.  Since then, I have been haunted by the idea that those people would never escape from their poverty as long as they were not welcomed as a whole, as a people, in those places where other people held debates or led struggles.  They had to be there, on equal terms, in all places where people discuss and make decisions not only about the present, but also about people’s destiny and the future of humanity.

On July fourteenth, 1956, I signed my fate, even if I waited until November to settle for good in Noisy-le-Grand.  Even on that day, the eleventh of November, I still held on to my old parish.  I kept going there every Saturday and Sunday.  Born as a child in deep poverty and having remained a man of poverty, I had learned to believe in everything, to dare anything, but still to keep something in reserve somewhere — put something away for a rainy day, a stale piece of bread in my pocket.  There is not one poor person who would not do likewise.  My own mother would keep a spare pair of shoes for her children, or a spare pair of trousers.  When someone brought us another pair of secondhand shoes — we did get many handouts — my mother would say to the benefactor, “Thank goodness you came.  It’s just what we needed.”  When we were on our own, I would ask her, “Mama, why did you do all that play-acting?”  She would tell me, “Joseph, you don’t understand.  If you refuse what they bring you today, the day you do need something they will have given it away to someone else.”  I kept my old parish for several months as a security measure, like my mother who always kept an extra pair of shoes.