Rethinking Poverty and the World in Order to Take Action 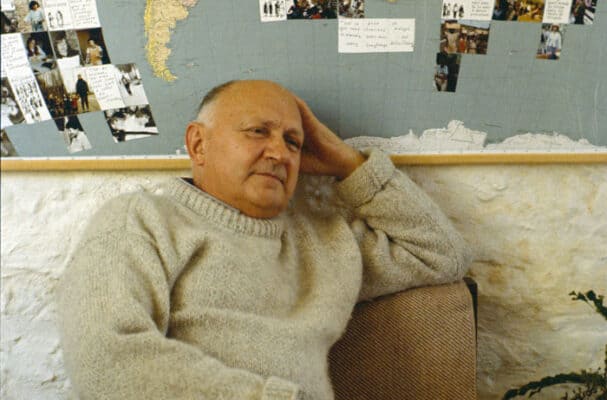 Excerpt from Rethinking Our World from the Perspective of Poverty with Joseph Wresinski. This book stems from the proceedings of the Cerisy colloquium held in June 2017, on the occasion of Wresinski’s centennial.

By Bruno Tardieu and Jean Tonglet, co-directors of Cerisy colloquium.

Why a colloquium on poverty? Poverty seems to be primarily a call to action. It moves and upsets us, especially as we share the intuition that it seriously impacts our humanity. Victor Hugo, speaking at the French National Assembly, said: “I do not want poverty to be relieved, I want it to be destroyed.”1

With poverty, there can be no equivocating; taking action is required. So why have we locked ourselves away in a mansion to think about it together? Are we wasting time that could be better spent on taking action? Yet a French mayor and member of parliament, Jean-Noël Carpentier, chose to contribute his discretionary fund to support this colloquium because he believes we need to rethink poverty in order to act more effectively.

Following in the steps of Joseph Wresinski, we assert that poverty is often thought about too little, if at all. Theories about poverty are often based on misconceptions and serve only to confuse. Poorly thought-out approaches miss the mark, and their failure is quickly attributed to poor people themselves, who are then described as uncooperative. And in the end, everyone is discouraged.

People often believe that working to overcome poverty means taking action for the poor and meeting their needs for food, drink, and shelter. This idea is found in the oldest texts. The Code of Hammurabi, the earliest known text of law, stated what we must do for the pauper, the widow, and the orphan – what we must do for them. They are not part of the “ we ” who conceive the common code, the law. Even today, with the power of the charity industry, society directs us to provide the poor with food and shelter.

In 1987, the French National Consultative Commission on Human Rights asked for a contribution from Joseph Wresinski, a member of the commission, to a fundamental reflection on human rights. He wrote: “It is not hunger, illiteracy, or even unemployment that is the worst misfortune for human beings. The worst of all misfortunes is knowing you are considered worthless to the extent that even your suffering is ignored.”2

Restrictive theories about poverty reduce people to their needs and, even worse, only to their physical needs. Any steps taken respond to the supposed need, rather than the known need, and they fail again and again. Even the people who carry out charitable distributions say: “We cannot not do it, but we know it’s a bottomless pit.” They take action without actually believing in what they’re doing.

Another source of confusion is often the idealisation of poverty, when people mistake poverty for the asceticism chosen by Francis of Assisi or Buddha. They confuse the nobleness of humility with the violence of humiliation. And they add more confusion by claiming that poverty could be a form of freedom. People who experience it could have chosen it, they say. And to hide their disappointment, some teachers would tell us:

“Don’t insist on teaching them to read, their families don’t care that much about it. It’s their choice, after all.” Joseph Wresinski clarified the difference between “pauvreté” (poverty) and “misère” (misery, or extreme poverty): Poverty, material deprivation, oppression inflicted by those who have power are hard to bear. What is truly insufferable, however, is being despised and continuously reminded that one is an inferior and utterly useless being. Fourth World families bring this home to us day by day. Being treated as a person without dignity even by one’s own is virtually intolerable. “People treat us like nobodies. Are we dogs to be kicked around as we are [by the authorities]?” This is where the difference lies between poverty and misery. A person in misery suffers an unbearable situation, being considered negligible or, worse, a harmful being who should never have been born, while deep inside he still knows he is a person. To long for dignity, to dream of being someone and yet to be denied this even by those hardly better off than oneself: the neighbours, the grocer, the postman – that is misery. And that is what makes the difference between poverty and exclusion.3

The idealisation of poverty and the confused awareness that it is unacceptable and inhumane is another paradox. People in poverty are sometimes considered angels, and sometimes demons.

The historical role of the poor in the fight for justice brings to light another confusion. Karl Marx, a philosopher of a history that moved towards justice, drew a distinction between poverty and extreme poverty in regard to production: on one hand, the productive proletariat and peasantry, capable of waging the class struggle that will lead to change; and on the other hand, a lumpenproletariat prepared to do anything in order to survive, including forming an alliance with employers. But this distinction between the good and the bad proletariat, which echoes the eternal distinction between the good and the bad poor person, is not supported by the facts, as Marx himself recognises in his analyses of history.

In his analysis of the revolutions in France, Marx writes that the provisional government in 1849 decided to recruit a mobile guard from the lumpenproletariat, which “forms a mass sharply differentiated from the industrial proletariat, a recruiting ground for thieves and criminals of all kinds living on the crumbs of society, people without a definite trade, vagabonds, gens sans feu et sans aveu [men without hearth or home]”.4 He explains that the strategy was to play off one part of the proletariat against the other. “And so the Paris proletariat was confronted with an army, drawn from its own midst, of 24,000 young, strong, foolhardy men.” He adds that the proletariat itself “acknowledged it to be its foremost fighters on the barricades”. Thus, after having set them in opposition, he sees the continuity between proletariat and sub-proletariat. More fundamentally, the central paradigm of the class struggle has led Marxism to the paradox of wanting a strong oppressed class to take over the means of production and being incapable of conceiving a role for the people most crushed by oppression.

An electronic version of Rethinking Our World from the Perspective of Poverty with Joseph Wresinski is available.
A printed version can be ordered using this form.

1 Victor Hugo, 30 June 1850 speech before the Legislative Assembly in Paris.

2 Joseph Wresinski, “The Very Poor, Living Proof of the Indivisibility of Human Rights” (1988 text prepared for the French Commission on Human Rights). Original translation at: www.joseph-wresinski.org/en/the-very-poor-living-proof-of.