The basic human right to have a holiday 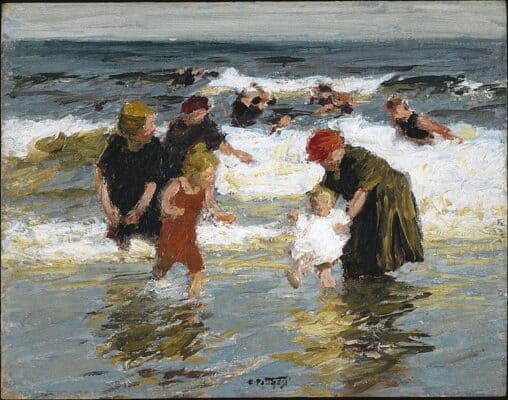 It was 1959. I had been in the Noisy-le-Grand camp for over two years. I was tired; my nights were full of anxiety and fear. Things were going badly for the families. It had been very cold and very hard that winter. Children had been taken away from their parents who were unable to feed them. Most of them could not go to school because there was no room in the classrooms for them and they had no shoes.

Summer had arrived. There was no room for hundreds of children in the Swiss, Belgian or French holiday centres. New-born children were dehydrated and being taken into hospital.

It was no life, desperate in the face of so much suffering and so few resources to deal with it. Friends offered to have me for a few weeks in Switzerland. There I could escape this daily hell, regain my strength. and would go back into the midst of poverty more cheerful and more positive about the future of the families.

I spoke to them about it: some were happy and encouraged me: “You are too tired. You won’t last long with us, it’s too hard”. Some thought: “It’s an excuse, he won’t come back”. There was also jealousy. “In the three years we’ve been here, we’ve never even been as far as the Noisy Town Hall”.

“Holidays? My children were not welcomed by the Swiss. We couldn’t afford to pay”.

All in all, the feelings were mixed. I came to understand, in that summer of 1959, that holidays were for the rich. Sometimes, some people told me: “You are lucky to go to Switzerland”. Others made me feel better, “It will do you, you’ll be less irritable”.

On the 12th of July, I left the camp to go to the Gare de Lyon. I didn’t have the courage to get on the train. I retraced my steps, returning to the shanty town that evening.

I couldn’t go on holiday at that time, leaving behind 252 families and more than a thousand children out of the 1,200 who would never go on holiday.

It was in the summer of 1959 that empty-handed, with and no volunteers to encourage me, I decided to establish holiday homes where families could be welcomed and where they could welcome other families. themselves (…)

The families needed a place to retreat to, a haven of peace where they could regain their strength, restore the bonds between spouses and children, and friendship between neighbours. A place that was permanently open, ready to welcome at any time one or two families in difficulty or in the process of going under.. These were the plans that I formulated in that summer of 1959.

In 1966, a house was acquired in Rue Cossoneau in Noisy-le-Grand; the following year, La Crausa was given to us in Treyvaux, Switzerland. In 1973, we were able to buy the farm in Wijhe, in the Netherlands, and in 1978, La Bise, in Arbois, in the French Jura. Finally, in 1980, we acquired Brendam in Scotland.

And so, thanks to the courage of volunteers, the poorest families in Europe had gained places where they could spend holidays, their own holidays. Finally, they could find peace, sunshine, nature, laughter and joy. No more living as prisoners, trapped in poverty, imprisoned in daily life with no other perspective, day after day, than facing the grey walls of the housing estates, their own suffering and the anguish of their neighbours: a few weeks without overcrowding, arguments and shouting. Finally, they would b able to love and value each other, to talk together in peace, to make plans, to become themselves again and to make friends.

But when, after ten years, the first holiday homes were finally opened, nothing had been gained. Refreshing one’s mind and heart, drinking in the sun, sharing it and bathing in it, rediscovering and loving nature is a matter for ecologists, for real tourists, not for poor people.

Nature for all, the sea, the mountains for all had been the dream of the defenders of Human Rights. It was not the dream of the governments, whether in Great Britain, the Netherlands, France or Switzerland.

In addition, the quality of friendship that was shared in these holiday homes, got no support from the public authorities: the right of children to get to know the trees, the sheep, the cows, to discover other horizons, was a non-existent right for the children of poverty.

It is a fact. The right of the poorest families to relaxation, to a change of scenery, to a time of freedom and self-renewal, was still not recognised in 1984 after 25 years of combat and struggle.

Today, it seems that the times are too difficult to think about holidays, to offer parents and children from the most exhausted and abused families, opportunities to think of themselves as human beings, people who have the right to think, to laugh, to play, to wonder, in a word to be human.

The majority of families in our countries still take at least a week or two away from the worries of their everyday lives. But some go so far as to say that the unemployed take holidays all year round and that it would be indecent to pay them for days of rest and enjoyment. “If they are tired, it’s because they aren’t doing anything”. It’s ironic, isn’t it? Isn’t the unemployed worker, more than anyone else, worn out, discouraged and desperate?

The right to a holiday is the right to be human. Do not close this booklet without promising yourself to fight so that all families, rich and poor, can have the chance to leave everyday life behind for a few weeks in order to recover their humanity.