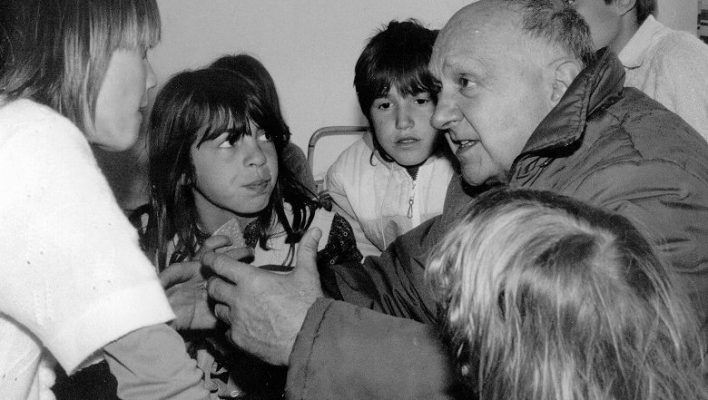 Joseph Wresinski was born to immigrant parents in a poor neighbourhood of Angers, France. He grew up in a family which suffered from great poverty and social exclusion. In 1946, he was ordained as a priest and served in industrial and rural parishes where, from the beginning, he related to the most disadvantaged  families.

In 1956, Father Joseph Wresinski was assigned by his bishop to be a chaplain to 250 families placed in a emergency housing camp in Noisy-le-Grand, near Paris. The families lived in huts erected in a muddy field. He said about his years in Noisy-le-Grand: “The families in that camp have inspired everything I have undertaken for their liberation. They took hold of me, they lived within me, they carried me forward, they pushed me to found ATD Fourth World with them.”

In 1957, Father Joseph Wresinski and the families of the camp founded the first association which was later to become ATD Fourth World. They replaced soup kitchens and the distribution of old clothes with a library, a kindergarten and a chapel. Joined by the first few volunteers, he soon created a research institute on extreme poverty which brought together researchers from different countries and disciplines.

Since it started, the development of ATD Fourth World has been inspired by Father Joseph’s own experience as a child in a poverty-stricken family and by his daily contacts with very poor families and members of the ATD’s Volunteer Corps.

Father Joseph’s firm purpose was to unite all sections of society around those in extreme poverty. With this aim, he met leaders of state, churches and international bodies from all over the world. He believed that every man or woman he met represented a chance for those in extreme poverty and he was determined that ATD Fourth World would remain open to people of all cultures, faiths and races.

His appointment to France’s Economic and Social Council in 1979 was a significant step in his quest for official representation for people in extreme poverty. With the publication of the Wresinski Report in 1987, he succeeded in gaining recognition of those in extreme poverty as partners in society.

On 17th October 1987, in the presence of 100,000 people from every social background and continent, Father Joseph Wresinski unveiled a commemorative stone in the Trocadero Human Rights Plaza in Paris. On this marble his call is engraved:

“Wherever men and women are condemned to live in extreme poverty, human rights are violated. To come together to ensure that these rights be respected is our solemn duty.”

Since then the commemorative stone has become a rallying point for people from all walks of life. They gather to bear witness to those in extreme poverty throughout the world and to make a personal commitment to join forces with them in abolishing poverty and social exclusion.

October 17th was declared “International Day for the Eradication of Poverty” by the United Nations in 1992. In several countries, on the 17th of each month, people gather for a short commemoration in honour of people who suffer from extreme poverty, and to renew their commitment to them.