Skip to content
Home > Writings > A profound love for humanity

A profound love for humanity 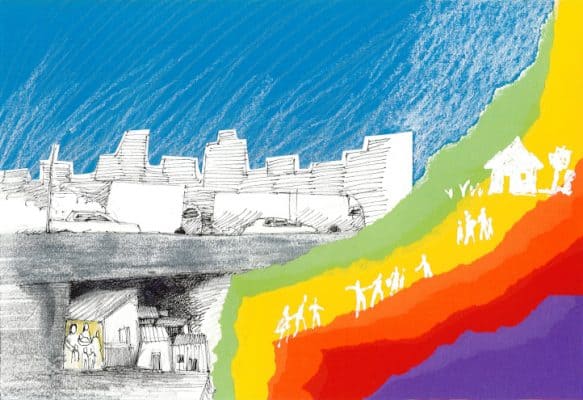 Published as an editorial in the Revue Igloos, No. 44, January-February 1969, this text was announced as a “reflection on the occasion of the forthcoming screening (in March 1969) on “Choses vues” (a French television series of documentary programmes) of a report on an emergency housing estate in the Paris region”. Father Joseph Wresinski feared that the graphic and realistic images portrayed in this broadcast, directed by Roger Stéphane, would shock viewers. “This report,” he wrote, “reveals for the first time the painful face of misery in the West, without the veneer of pity. He concluded by saying that extreme poverty is shocking, but it should not cause us lose hope.

Against untold odds,
holding on to a sense of wonder,
because they too are human
and believe they will cope with whatever befalls them:
fortune and misfortune,
joy and suffering,
hope unfounded and unfulfilled.

Believing that miracles will happen,
that days of anxiety, anger and aggression,
will be closely followed by other days
blessed with understanding, dialogue and affection.

Believing in spite of everything
that by virtue of their humanity
they will ultimately fulfil their human destiny
and find with their loved ones
joy, peace, happiness and affection.

Believing they will bring to others the support of their failing arms,
of their bodies worn by privation, injury and disfigurement.

Convinced they will commune
with
greater,
better,
truer,
more beautiful
than themselves.

Believing that with hearts
so often scorned, humiliated, broken and betrayed,
they can still partake in loving relations.
And even certain, strange as it may seem,
that their prayers will be answered.

To be torn apart by their hurt,
wounded by their traumas,
bloodied by their beatings,
destroyed by their annihilation,
hoping with their hopes,
loving with their love,
praying their prayers,
standing together with them to face such misery,
hunting it down, destroying it.

This is what eradicating extreme poverty means
paying the price for justice, freedom, rights and powers
goes far beyond ideas, good intentions and actions.
It means bringing into being
a profound love for all humanity.