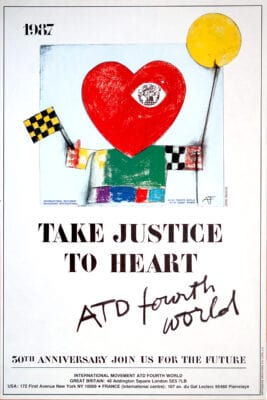 Just one month before October 17, “World Day for Overcoming Poverty”, this speech by Father Joseph Wresinski reminds us of the meaning he gave to the demonstration called in Paris on October 17, 1987. Addressing an assembly of members of the International Movement ATD Fourth World in Heerlen, the Netherlands, on 15 November 1986, he explained the reasons that had led him to suggest the slogan “Take justice to heart” for the campaign that marked the 30th anniversary of the foundation of ATD Fourth World in 1987. The campaign culminated in the dedication of a stone in honour of the victims of poverty on the Plaza of Liberty and Human Rights in Paris, on 17 October 1987

“How can people just stand by and watch my children suffer at school without being sick at heart?” “How could his employer be so heartless as to fire my husband?” “How could the social worker be so cold-hearted and so unfair as to accuse me of not being a good mother?” The real pleas coming from families, your pleas, families of the Netherlands, are first and foremost those. “How could they have the heart to hurt us, despise us, humiliate us, and constantly make us feel that we are worth less than nothing?”

“It’s not fair; that’s what’s not fair first of all,” you often say, when I see you at Wijhe farm. The first injustice, which should be the first to end, is injustice in the heart. It is that most terrible injustice that makes some people feel superior to others and believe they have the right to despise them.

I am thinking of a Dutch mother from Koevorden who told me how she lived with her parents on a barge when she was a young girl. “It was nice and clean in our home,” she told me, “but people from the town didn’t believe it. They despised us and thought we weren’t clean, and my schoolmates weren’t allowed to play with me at home on the barge.”

It is that injustice in the heart, that injustice in the way you are looked down on by those around you, that made the young girl, when she later became a wife and mother, understand all the other injustices, those of the laws. She now understands why she and her family have had to live in an apartment that has needed repairs for over ten years. She waits from one year to the next because the town has to save money. It is always the building she is living in that is struck off the municipal budget.

It is blatant injustice because families with more resources get decent accommodation from the town. But this mother understands the origins of this injustice in the administration of the town. The civil servants who process her file at the town hall were children when she was a little girl. And since childhood, they have heard that people living on barges are not clean and that you shouldn’t play with the children there. As children, these civil servants had not learned to take justice to heart, which says that every other child is a brother or sister, a friend. (…)