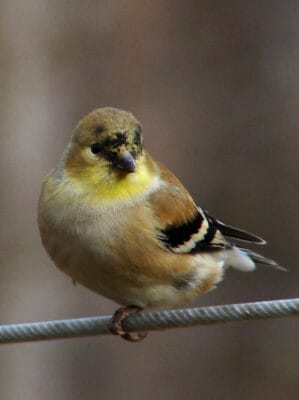 One event from my childhood
left profound repercussions in my life.
It happened at a time when horrible poverty had hit our home.
Why?  I no longer remember.
The reasons have long been buried along with so many other memories,
at the bottom of my mind, meshed in the web
of the thousands of things that struggle within us
that we call grief, suffering, numbness, and despair.

The memory that remains and which often floods my mind,
reminding me of so many childhood anxieties,
is of a bird that died.

It was a goldfinch.
My brother and I found the bird and adopted it
one morning after I had served mass,
as I had been doing, rain or shine, since I was five,
at the bottom of Brault Street,
where the waters of the Maine River
swell up from the sewers to drench the gardens
and the low buildings of the Good Shepherd Convent.

The bird must have escaped from a cage.
He was wounded, and let us pick him up without a struggle.
He became our friend, without fuss or flights of fancy,
like poor people who get gifts
and never know how to act in order to show their gratitude.

Then came the days when we were all really miserable.
My mother stopped taking care of the house
which she had always tried so hard
to keep from looking like a slum:
“Put this away, pick that up, sweep the floor,
get out of my way while I clean the table…”

It was our only table
where mother got vegetables and meals ready,
stacked the dishes and laid out the knives and forks.
On the same table, we did our homework at night,
or sat there reading books–which got on her nerves–
“ Aren’t you through reading, when there’s so much work to do? ”

Poor mother!  After supper, and on days when there was no school,
we would take a bunch of roll-up Zig-Zag cigarette papers
and pack them in their cardboard packages
to earn a bit of money.
Is that why, to this very day, tobacco,
and everything associated with it, make me sick?

But at the time I’m speaking of,
we had stopped doing even that bit of work.
In the evening, we sat there before bedtime,
not daring to say a word,
as though the mere sound of our voices
could set off another catastrophe.

Were we still going to school?  I don’t know anymore.
I only remember my little brother, Martin,
who did nothing but cry.

It seemed that time stood still for us,
and that nothing mattered anymore.
We dragged through days like the living dead,
just surviving from one dawn to the next.

How long did this last?
Probably not long,
but that time was so intense and terrible
that it fills an exceptionally large spot
in my memory.

No, it couldn’t have been more than a few days.
Otherwise, as children, we would have exploded
and run away from our mother’s suffering.
Perhaps we did run away from it anyway
from time to time.

Then one day, the sun showed up again
in the room where we lived,
this room steeped in shadows by 4 p. m., even in summer.
What brought the sun back?
Was it good news, a gift, a kind word?

I no longer remember.
But time resumed its ordinary course again,
life slowly started up–everything went back to normal.

And then we noticed that the bird had stopped singing.
Silently, we looked at the cage,
at the friend whom we felt guilty for neglecting.
Why had we forsaken him?

Was it because, in our time of need,
he could do nothing for us?
Or wasn’t it more likely because when sorrow cuts too sharply,
everything stops–time, feelings, God.

“If God existed!  No, it’s better that he doesn’t exist,
because, if he did, we’d have to curse him,”
Mrs. Duburg would tell me.

Apparently, the time of trouble was over,
but things had yet to fall back into place.
Step by step, our mother had to resume her role
as a poised and confident parent.

People and things had to return to normal,
like our relationships with our neighbors.
Our mother gradually had to take back
words that she had perhaps spoken too hastily.

Even between her and us children,
irritations and misunderstandings
that emerged during those hard times had to be forgotten.

As for us, we found our way back
to school and to morning mass.
We took up packaging cigarette papers again.
We could not forget our prayers anymore.
We had to wash and keep the table cleared.
We had to recreate the life we had known before.

But can you just pick up the pieces again that way,
when hard times come back so very often,
as they do in the lives of poor families?

How can you keep starting over
after these interruptions in time,
etched in my memory by the symbol
of this bird lying dead in his cage,
his tiny claws curled into the air,
like a tangible sign of those troubles
scarcely healed and already breaking out again.

When over and over again, time grinds abruptly to a halt,
when events dig such deep furrows,
is it possible to judge things and people as everyone else does,
to make up for lost time,
to put everything back into place?

Is it possible to believe in an orderly life,
to build one’s life, to live?
Unless you meet with great love in those around you,
I think not.

As I write these last words,
I can’t help thinking of the love
that Christ offered to the disenfranchised.
He had to identify with them so they could share in his love.
He made himself present in their lives.
He shared their condition.
That’s how he, the Eternal, stepped into the temporal.
He also experienced time skipping a beat,
standing still because of tragedies, catastrophes, and endless anxieties.
He found himself caught up like the living dead
inside the daily lives of the wretched.

With each tragedy and catastrophe,
because of the attacks and plots against him,
he identified more and more with the poor,
until at Golgotha,
he became the first among all sufferers.
It was then that love defeated misery,
and the poor were welcomed into Eternity.

My friends, whoever we may be, we hail love.
Thanks to this love,
even when I’m shrouded in twilight, I will never forget
that on a day of distress,
time stood still for me and my family,
and that a dead bird sent the signal it had stopped.
We know that, for the dispossesed,
love alone will give birth to a bright dawn.