Skip to content
Home > Writings > We had only ourselves to offer

We had only ourselves to offer 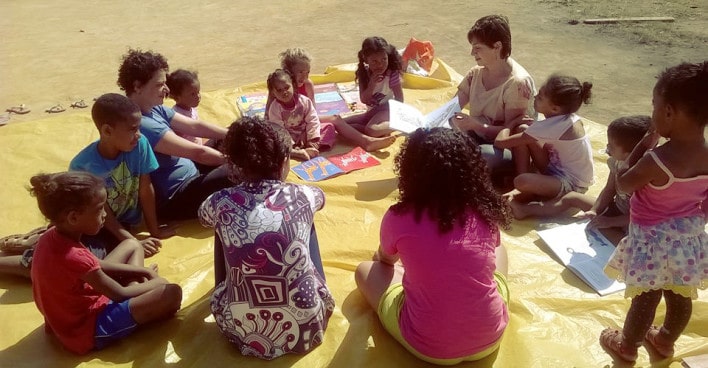 In the introduction of his book “The Poor are the Church”, after having evoked his childhood in the text “A young boy caught in the vicious circle of violence”, Father Joseph relates the beginnings of the Movement.

We are not creators.  We are heirs.  In the contemporary Church, others in France and other parts of the world started movements as they met the poor and the excluded.  Men such as Abbé Godin, Father Depierre and Abbé Pierre opened doors and entered the world of the destitute.  We are part of a spiritual current — with intelligence guided more by the heart than by ideas — of meeting the very poor.  Ours is a movement striving for peace, struggling for food and fighting for justice.  Our struggle and our action converge somewhere in our concern for those most despised.  We are not creators, although poverty leads us to be inventive; perhaps we are innovators.

Where does our originality lie?  At the time when the Fourth World Movement was started, society was confident; everybody thought that progress coupled with aid was going to abolish poverty; nobody questioned this outcome.  In such a context, how was it possible at any level of society to believe what we said about poverty?  This was the major problem we came across.  It was in this context that Abbé Pierre revealed the plight of the poorest and the Fourth World Movement focused on the poorest people as families.  This was a bold step, when society was beginning to lose interest in the family; even today, our emphasis on the family is still misunderstood by the social services and the authorities.  Why do we care so much about the family?  It is a person’s only refuge when all else fails; it is the only place where a person might still feel a welcome; it is the only place where one can still be “somebody.”  A person finds identity in the family.  The children, the spouse or companion constitute for a person the last refuge of freedom.  Even if children are taken away, they remain a reference point for their parents.  Because we emphasized the family, we were regarded as old-fashioned, which caused us great suffering but did not shake our resolve.

From the start, the decisive factor in the Movement was that we had only ourselves to offer.  We owned nothing.  We were not a housing organization or social workers coming under some ministerial department.  We had only our hearts to offer.  Living with the bare minimum and few resources made it possible for us to be accepted by the most disadvantaged families.  We had no power whatsoever, political or social, nor did we have the support or the guarantee that comes from belonging to a religious denomination.  We came empty-handed into the heart of poverty.  We could only give what we were; that is, men and women determined to devote our lives to fighting alongside those who had been thrown into destitution.  Our only objective was the people and their advancement and promotion.  From the start, our aim was that those families who lived in utter poverty become the defenders of their own.  We started from nothing, with no outside support or contacts, sharing with the families their condition of total destitution.  The majority of them had known nothing but poverty, ignorance, illness, unemployment and always rejection and exclusion.  We wanted their own efforts to be the stepping stone back into society, as people responsible for themselves, their children, and their own lives.  This was aimed at bearing testimony to the worth of every human being, for no one is ever completely at the end of the road.  If the poorest of the poor could to some extent live in an atmosphere of sociability and solidarity, even as they were trapped by poverty; if the disadvantaged were in a position to assert that life and society could have other mainsprings than consumerism and profit, it meant that a new world and a radical change of perspective could be proposed to all people.  We were proposing another type of relationship and another aim for our struggle.

Such a plan met with many difficulties.  Our rich and prosperous society was unwilling or unable to see poverty, alleging that it had been done away with.  Therefore, we had to bear witness to what we heard, to what we saw and to what we experienced.  Proclaiming what we witnessed was not sufficient; the message had to be understood.  This necessity led the Movement to set up its own Research Institute.  We supplied the evidence for our claim; that is, not only do the very poor exist — they are here among us — but, because of the life you impose on them, they bring to light the occasions when you do violence to your own convictions and contradict your own assertions and ideals.  The setting up of the Research Institute was a political act in the full sense of the word; it denounced a situation, based on evidence, and it proposed measures.  It also proved that people of all walks of life could join together for a just cause; that is, to enable the disadvantaged to shoulder their own responsibilities.  It demonstrated that to prevent these families from taking on their familial, social, political and religious responsibilities was a contravention of basic human rights.

Another point I want to stress is that, confronted with a rich society trying to ignore poverty, the Movement chose from the start to be interdenominational and interpolitical, rather than non-denominational or apolitical.  I knew from experience how fortunate Catholics and believers in general are, in that their education has taught them to love others.  I came across many institutions unable to work for the liberation of the destitute despite their desire to do so, and I felt we had to share the chance we have as believers.  For me, everyone, of whatever ideas, beliefs or culture, has a legitimate right to descend to the lowest rung of the social ladder.  It is hard to imagine how difficult this is for people who do not have the privilege of belonging to a church, as we do.  Everyone should be able to turn the poorest families into a focal point, actively involved in the liberation of others.  It is difficult to comprehend the suffering of those who are confronted with destitution and who have not acquired at an early age a certain way of looking at others, at seeing the poorest as those with whom Christ has totally and without reservation identified himself.  In that respect, too, we do not always realize what we owe to the Church.

When confronted with destitution, the first French volunteer, who was an atheist, relied on her sense of justice and her deep humanitarian feelings.  She was profoundly affected, almost destroyed by the failure of the poorest families.  She cannot transcend or accept failure, because for her there is nothing beyond failure.  When I say that being interdenominational is an act of justice toward those who have not had the chance to be brought up with a special concern for others, there is no conceit in my words.  Within everyone there is a seed of tenderness, which has to be brought to light and be nurtured from childhood on.  The need to share with another person, to feel and take on the other person’s suffering and turn this suffering into hope, can only be the fruit of education or conversion.

In our Movement, we see people as people first, not through a program or a structure.  As long as one does not feel bound and confined by an organization, one can be free to live an ideal that is dependent upon the people themselves with whom we want to share it.  Thus the poorest family can become the focal point, the center of concern for all.  By making the most deprived person the center, we encompass all humankind through a single person.  This does not mean limiting our vision, but rather projecting it to the realm of love.  Love has no confines; it cannot be imprisoned; it cannot be restrained.  It is always folly.

When I finally got to the Noisy-le-Grand camp, I said to myself: Those destitute families will never be able to pull through on their own, but if I join them they will climb the steps of the Elysée Palace, the Vatican, the United Nations and all the great international organizations.  They must become full members of our society.  This idea, which was conceived on this barren land in the middle of summer 1956, might seem ridiculous to some people.  Christ contemplating the world on Golgotha declared that he had conquered it.  Anyone who makes the poorest person the focus of attention cannot fail to see the whole world, to see all of humankind in the same vision, leaving no one out.  In a way such persons, too, from this vantage point, can declare themselves to have conquered the world.