Skip to content
Home > News > “Keep going, despite the challenges”

“Keep going, despite the challenges” 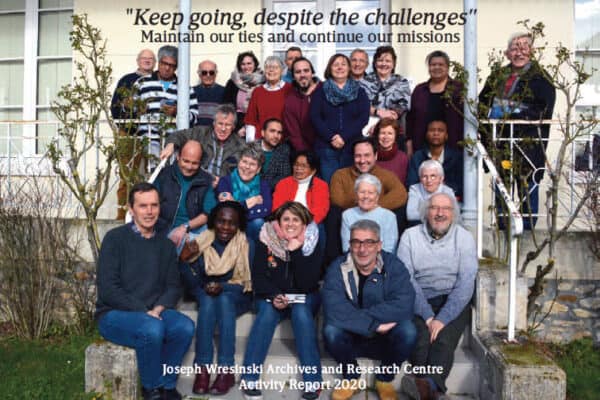 Maintain our ties and continue our missions

Against the backdrop of a long and major crisis linked to the pandemic, the team at the Joseph Wresinski Archives and Research Centre (JWC) sought to implement everything possible from the outset to “keep going, despite the challenges”, guided by two key principles: maintain our ties and continue our missions. This required continuing with day-to-day tasks and the ongoing projects, in compliance with the JWC programme, while also maintaining the ties within the team and with the teams of the Movement beyond the JWC premises, as well as with all its partners involved in the various tasks associated with the archives, documentation and research projects.

From the moment of the first lockdown, the JWC team mobilised resources to ensure that everyone had the means to continue with their work, despite the distances and the absence of physical connections in the workplace, which was often keenly felt. The everyday work of the JWC was coordinated via virtual meetings. The processing of digital archives was given priority and reinforced to enable classification work to continue, while the work to describe physical archives continued on-site at a minimum, where possible, while respecting the government measures

Young people were particularly affected by the severing of societal and cultural ties resulting from the crisis. As such, the JWC sought to reinforce the inclusive and participative aspect of its legacy and research work by welcoming student interns, young volunteers undergoing training or in transition, and participants of workshops organised by the Movement, and supporting them on-site in Baillet-en-France.

The JWC also quickly mobilised resources to collect and publish testimonies on the Movement’s websites of what those living in extreme poverty were living through, how they were coping and their thoughts on the period. “If we do not create history,” says Bruno Tardieu, Director of the JWC, “if we do not keep a record of how those living in extreme poverty are experiencing this period, nobody will know what happened. History, as witnessed by certain people, will be erased by that witnessed by others.” For a large part of the global population, confinement has not been possible: if people do not go out in the morning, they will not eat in the evening. The unusual nature of the situation for many prompted the following remarks from one activist in Belgium: “For those of us living in poverty, being isolated is the norm. Perhaps now, others will realise what we live through every day… I hope – he says – that this will be a turning point, a sort of ‘reset’ button.”

The disruptions due to the exceptional nature of the crisis brought on by the pandemic and the many measures put in place by the public authorities to safeguard health and control socialising in order to combat the pandemic have shone a light on the ‘ordinary’ elements of the JWC team’s work. It is this aspect of the everyday life and activities of the JWC, during a pandemic, that we have sought to highlight in this Activity Report.

We would like to interpret the JWC’s will to maintain its ties and continue its missions, despite all the challenges, as a contribution to a ‘reset’ towards an alternative world, a world that neither forgets nor leaves anybody behind.